Ecological Epigenomics. Wild species can exhibit numerous phenotypes, some of which have been locally adapted, often classified as ecotypes or perhaps subspecies supported by genetic evidence. Any species with a large geographic distribution, often spanning a variety of ecologies (e.g. arid, boreal forest, arctic) can be the focus of exploring how habitat gradients and genetics are correlated, often under the hypothesis focused on genes that are locally adapted. Across said gradients, populations can be highly differentiated with fine-scale genetic structuring and phenotype variation. Analysis of the methylome can provide a unique opportunity to address ecological/evolutionary questions regarding adaptation and response to selection: What degree of natural epigenetic variation exists? Do patterns of methylation segregate with locally adapted populations or overlap with known locally adapted loci? Do transposition-methylation dynamics correlate with fine-scale population structure? How do phenotypes and methylation patterns segregate? Further, I can survey variation in the regulatory genome in relation to specific phenotypes (e.g. body size, skeletal proportions, coat color), social rank (e.g. stress, aggression), demography (e.g. inbreeding), or evolutionary history (e.g. domesticated species, highly inbred or genetically isolated).

Molecular foundation of complex traits. Locating the molecular foundation of behavior is a very challenging objective. Behaviors can potentially be influenced by genotype, epigenetics, or both. My research group is working towards examining the molecular variation linked to specific behaviors that are described by quantified traits. Primarily, we are focused on fitness-related traits and understanding how natural or artificial selection may shape their molecular architecture.

Strong artificial selection of domestication and recent selective breeding of dogs has targeted specific genetic variants of large effect (e.g. coloration, skeletal proportions). Along with many variants at the DNA level, other dimensions of the genome have likely been shaped by artificial selection. Transposons are mobile DNA elements that can amplify independently of the host genome, with their insertion locations potentially influencing gene transcription. Most transposons are targeted for epigenetic silencing by the host defense system but some are likely to escape silencing. Insertions into regulatory regions or transposons that capture/duplicate functionally important coding regions are expected to rapidly impact phenotypic diversity. These, among other genomic features, are the targets of further genome analysis of wild and domesticated species. 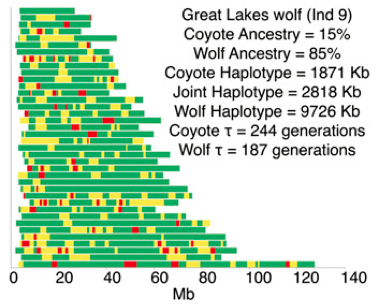 Closely related species that readily hybridize are often the center of controversy over taxonomic status and priority for conservation management. Ancestry of potentially mixing populations is difficult to resolve when the parental species are closely related. Using a genome-wide approach across a geographic sampling of putatively admixed populations, resolving the ancestry assignment of genomic segments will assist in mapping out not only geographic hybrid zones but also estimate the timings of the initial admixture event. This has become a major focus in my research group. To see more details of this work, please visit our project's webpage: The North American Canine Ancestry Project.

This project is on going, with analyses of wolves newly sampled each Winter season. We integrate field-based observational data, in addition to pedigree-based inheritance analyses, to explore the changing genetics and traits over time in this highly monitored and recovered population. Their pedigree also plays a central role for estimating heritability of traits as well as exploring the molecular components of complex trait.